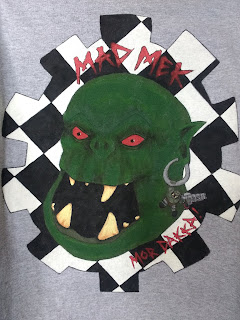 Greetings everyone!  As 8th Edition looms ever closer on the horizon, I felt like it would be the perfect time to actually start working on my Age of Sigmar Ironjawz.  There are no 40k events happening at my FLGS for the rest of the month so it really does fit in well with my schedule.

One of the most important, yet often overlooked aspects of building you army is having a cohesive basing system for your army.  All of my 40k Orks are based in the same way.  I wanted to change it up a bit for my Ironjawz, so I decided on a dungeon floor, ruined structure look. I used a similar approach on some of my Deffskullz with a different color scheme.

To do this simple style base, you will need the following items:

Orks at the Nowhere GT

Greetings Internet Friends!  Da Mek is back with a quick re-cap of the Nowhere GT in El Paso, Texas.  7th Edition is almost gone and this tournament was probably the last chance I had to run my Looted Imperial Knight.  It was this reason that I decided to abandon my usual Big Mek Stompa list and instead ran the Knight along side my traditional Zhardsnark Bikes. 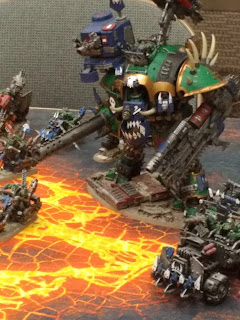 This tournament used the traditional ITC rules for list building: 1850 points, no more than three sources.  Here is the list:

One thing that was very disappointing was that I forgot to take pictures other than the one above, so this will be a giant wall of text.

Round 1 versus Ad Mech

First round I played against a silly list with Eldar Jetbikes, a Riptide Wing, and Belesarius Cowl in a unit of big fat robots with toughness 7.  Things went really poorly for the Greenskins and I ended up tabled on turn 5.  I managed to kill four models.

I played against a beautiful Deathwatch army run by a guy from Red Star Gaming group.  The army ended up winning best painted army, which was no surprise.  I love fighting Space Marines.  The games are always bloody and fun.  The game turned in my favor right from the beginning when his drop pods full of dudes and his Warlord failed to kill off my Knight on turn one.  I stomped out his Warlord and then things got really messy.  A close game even still.  Orks win 7 to 5

Round 3 versus Eldar and Tau

The worst possible matchup for my Orks.  I knew my only chance was to charge ahead as fast as possible and hope that he sent everything at my Knight instead of my Bikerz.  I managed to steal the initiative which was huge for me.  It played out exactly the way I needed it to and everything he had unloaded into my Knight, killing it on his turn 1.  My Bikerz ate his Wraithknight and my Manz crashed into his Riptide Wing.  The Big Trakks tore his jetbikes to shreds with three different units failing morale checks and zipping off of the table.  A lot of things went my way and I won this match 11 - 1.

Round 4 versus Ad Mech
More Cowl.  Less toughness 7.  This was another absolutely amazing looking army.  It took 1st place in the players choice awards.  The only knock was that a few unites were not totally finished.  I ate a unit of Infiltrators and didn't quite consolidate far enough away so Cowl and his minions caught my bikes in the center ruins.  Things went bad from there.  These were Nova Style missions and I lost something like 18 to 2.

YAY! More Marines to fight!  Lots of dead things everywhere.  My Knight squished his Warlord and I managed to steal and objective and King of the Hill by sending Zhardsnark all by himself to pop a tank.  Another Close game which I won 16-10 or something like that (Nova scores a little differently than I'm used to).

So 3-2 overall which was not bad considering the tough lists that I went up against.  In fact, it is way better than I had anticipated.  I managed to finish 2nd in the best painted army voting and 2nd in the players choice voting so I went home with a cool consolation prize: 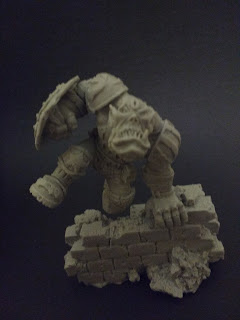 The Kaptin Orc model from Kromlech which I wasted no time in painting. 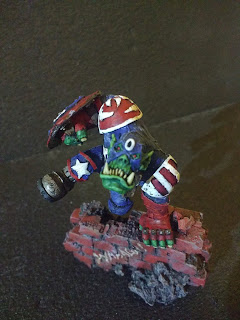 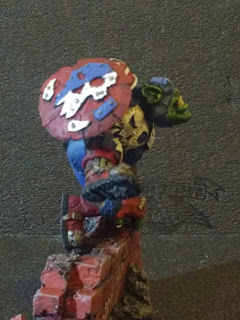 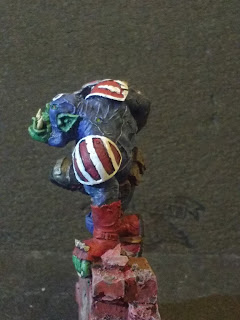 I have another small tournament coming up on the 21st which should still be 7th edition.  It is 1000 points with a single detachment.  I need to bang out a list.  Thanks for reading.  Feel free to comment and follow.

With another semester in the books, I am finally able to devote some time to my poor blog.  Da Mek has been busy, but I have managed to do a few hobby related things.  One of my goals this year was to finally get around to looting my Imperial Knight.  We had a local GT (more on that next post) which served as perfect motivation to squeeze in hobby between bouts of homework, work, family and a demanding lab.  My first goal was to make a nice base that fit in with the rest of my army. 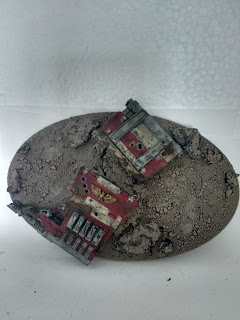 I'm BACK!  Semester is over!  I will be posting my Looted Imperial Knight soon.  The first time my Orks ever came across a Knight it was none other than Gerantius the Green Knight.  My Green Tide managed to destroy the walker but not before it krumped my Stompa.  So I decided that my Looted Knight would be a looted version of Gerantius. 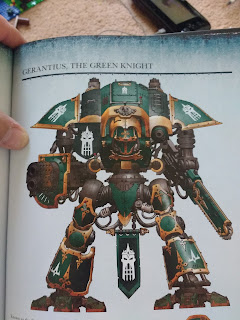